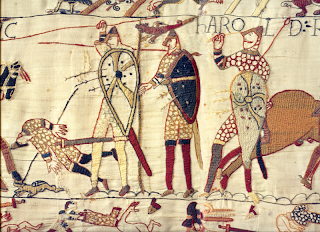 Any ideas what the following might mean?
1. Bewarping the way of rightwiseness
2. The American Forthspell of Selfdom
3. You have a wlitty anleth
4. Needness is the mother of afoundness
5. Lessness of ourlandish goods show unrightcrafting
It may look like gibberish, but somehow the five expressions bear some passing resemblance to present-day English. Perhaps this is not so surprising, according to David Cowley, the author of a recent book on the subject "How we'd talk if the English had won in 1066": this is how English might have looked or sounded if King Harold had won the Battle of Hastings. If it hadn’t been for the Norman Conquest in the 11th century, many French (and Latin) words would never have entered the English language.
You might think the book begrudges the victory of the Normans in 1066. However, it seeks to present an entertaining picture of how a language may have developed if history had worked out differently. Of course, it’s purely hypothetical, since many subsequent historical events have made a significant impact on the English language. But perhaps nothing quite so momentous as the Norman Conquest when the English nobility was replaced lock, stock and barrel with their Norman counterparts. Right up until the mid-14th century, the language of authority was French. If you could not speak French, you were unable to command respect. The king spoke French, as did his lords, knights, clerks, chaplains and servants. Hardly any of them would have been fluent in English, the language spoke by the commoners.
Many words which had their origins in Old English, such as go up, find out, put off and take off (and which are still predominantly used in everyday spoken language today), gained high-sounding equivalents derived from French or Latin: ascend, ascertain, dissuade and deduct. In fact, these loanwords are still considered to be the preferred choice in formal, written English: how many readers, the author asks, have been drilled into writing 'I received your letter' instead of  'I got your letter’. So whilst much of the Anglo-Saxon wordstock persists in modern-day English, many other old (Germanic) words were replaced by loanwords.
Here is just a flavour:
wastumbearingness = fruitfulness, fertility
oathbreach = perjury
afterfollower = successor
forthgang = progress
unmightly = impossible
So what are the expressions above supposed to mean?
1. Perverting the course of justice
2. The American Declaration of Independence
3. You have a pretty face
4. Necessity is the mother of invention
5. Minority of home-manufactured goods of poor quality
* Very useful
Posted by Chapter & Verse at 23:54 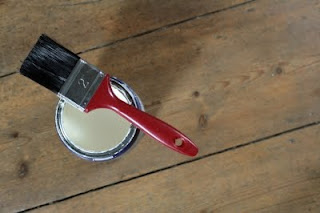 Any self-respecting translator will identify with the problem: you have more than enough on your plate when the phone rings and the client asks if you can just do a small job for them: “It will only take half an hour, we need it back by the end of the day, I'm sure you can fit it in somehow.” You try telling them, No, my diary is bursting at the seams. But you don’t really want to let them down (translators are good people after all). You think, okay, I’ll work through my lunch break, I’ll put off that shopping trip until tomorrow or I’ll give up my forty winks on the settee after dinner.
You put down the phone and start thinking, “Heck, why on earth did I say yes, I’m up to my eyeballs in work. I didn’t really need the job did I?” But we translators are gluttons for punishment.
I wonder whether a painter and decorator working on a large project would suddenly down tools, jump in the car just to touch up a bit of paintwork on a window frame ten kilometres down the road. Somehow, I seriously doubt it. He’d make a call-out charge as well. I make the allusion because the ten kilometres is the distance my brain sometimes has to travel to switch from one job to the next. One minute I’ll be toiling away on a legal contract and the next I’ll be asked to translate a photo-caption (with no photograph attached so no context either). And in the end the half hour becomes 60 minutes…
So next time you decide to appeal to my better nature, just be aware that I’m missing out on a slice of my life that I’m never going to get back. Thanks for your understanding.
Posted by Chapter & Verse at 23:01