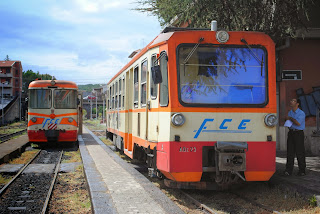 I seem to have spent an inordinate time travelling on railways in recent weeks. Not that this bothers me in the slightest: those who are familiar with me will know that this is my preferred mode of transport. Some people see a train as merely a means of getting from A to B, but for me, jumping on a train, however long the journey, instils a sense of adventure. Some may find the prospect of a long train journey daunting, even intimidating, but rail travel invariably provides me with a sense of freedom and relaxation that no other form of travel gives. Unlike a flight where - to all intents and purposes – you step out of one time warp into the next, the train journey delivers you to your destination across a seamlessly overlapping but ever-changing succession of landscapes and cultures.

I can’t pinpoint an exact moment in time when my weakness for trains was germinated.
It could have been the thrill of boarding a train hauled by Britannia class 70026 (‘Polar Star’) to our family's holiday destination on the North Wales coast, or perhaps standing on the parapet of a bridge on my way home from school with my head in a cloud of smoke billowing from a Class 9F Crosti-Boiler as it passed underneath. It probably didn’t help that I had a wider family fuelled with the same enthusiasm. At Christmas, my elder cousins would appear with their ‘Combined Volumes’ comparing the locos they’d copped on their trainspotting outings. My parents would even take us on rail excursions, on one occasion as far north as Kyle of Lochalsh. So my predilection for things on rails was sealed at an early age.

It’s not even as if I’m a habitual user of trains, but when I’m in a certain state of mind, I can fantasise about rail travel in much the same way as a person consumed by a craving for chocolate can hanker after a truffle. And if I’m not dreaming about trains, after half a century of travelling on them, I can look back on some fulfilling journeys. Like the childhood excitement of being pulled by Polar Star, some of my most memorable moments have taken place on trains or in railway stations. I’d say seeing the Matterhorn loom into view as the Brig-Visp-Zermatt train reaches its destination at the head of the valley is pretty high on the list. Sharing a journey with a crate-load of durians on the ‘jungle line’ from Kota Bahru to Kuala Lumpur runs it close. So too the crossing of the mighty St Lawrence into Montreal after being hauled up the Hudson valley through the Adirondacks into Quebec. Just three of many.

One of the great things about trains is that you can read, sleep, take a meal or enjoy a beer in the buffet car, engage in conversation with complete strangers, or just simply stare out of the window at the changing scenery. Rail travel is particularly conducive to reading, and if you can combine it with books about rail travel, then even better! One of my greatest pleasures was reading Paul Theroux’s wonderful Old Patagonian Express on an interrailing trip down to the south of Italy and back.

For my last birthday, I was given a copy of Italian Ways by Tim Parks, which bears the subtitle On and Off the Rails from Milan to Palermo. I think the friend who gave me the present had tipped Tim Parks off beforehand, because it’s a book that could have been written specifically with me in mind. Ever since my early twenties, when I was studying Geography at university, on and off, for work and pleasure, I’ve been travelling the Ferrovie dello Stato. For someone arriving at Milan’s magnificent Central Station for the first time, the significant role that railways play in Italian culture is plain to see. The Italian rail network runs to 24,000 kilometres and, after Germany (which has 41,000 km), it has the highest density of track in Europe. After the Risorgimento, the unification of Italy in 1861, ambitious plans were put in place to link the Alps to Sicily by rail to connect the hitherto divided peninsular.

Parks is an English writer and novelist who has lived in Northern Italy since 1981 and who has been writing about his adopted country on and off for much of that period. With Italian Ways he attempts to describe Italy through the windows of a train, travelling the peninsula from top to toe. He does so by making use of all categories of train, from regional trains and interregional trains to the high-speed Freccia Rossa. As the jacket on the book states: through memorable encounters with ordinary Italians – conductors and ticket collectors, priests and prostitutes, scholars and lovers, gypsies and immigrants – Parks captures what makes Italian life distinctive.

On my first visit to Italy I recall how passengers walked across the track at stations despite the omnipresent Vietato attraversare i binari signs. 35 years later, they are still doing it. The 1970s and the early 1980s had been a turbulent time in Italian politics with many radical groups on the left and right committing terrorist atrocities, such as the bombing at Bologna railway station which killed 85 and wounded a further 200. Bomb scares were common in the eighties and on that same interrailing trip our train got stuck for two hours in the baking heat of Calabria at the small station of Nocera Terinese after a warning of a possible bomb on the line ahead. The town’s gelataio, who’d got wind of the delay and had turned up pronto at the station with his ice-cream cart, made a pretty penny that day, whilst passengers seemed totally unfazed by the hold-up. Excited yet unflappable, the Italians simply congregated on the platform eating their gelati, engaged in animated conversation until the danger had passed.

In his book, Parks often alludes to the lost romance of rail travel. For example, he talks about how Milano Centrale’s concourse has been turned from a rail terminus into a shopping mall, where ubiquitous advertising and uniform shop frontage detract from the marble and granite grandeur of the building. Many grand stations, not just in Italy, have sadly suffered the same fate.
Neither should buying a ticket and jumping off on and off trains be taken for granted by happy-go-lucky train travellers anymore, with many operators in Europe only offering cheap-rate tickets if you book well in advance. Nowadays you might have to venture further afield to enjoy the pleasures of low-cost train-hopping.

Fortunately, Italy is still one of those places. On its regional lines it may run rolling stock which is far past its sell-by date and nowadays there is large-scale investment in semi-private high-speed initiatives which charge premium prices for reserved only seats, such as the Italo and the Freccia Rossa, but admirably, the Ferrovie del Stato still operates affordable services and rates on its normal regional lines between the main centres. Buy a ticket today and it will still be valid two months later for the same price.

My latest flurry of rail activity involved assorted journeys criss-crossing the Alps, the most notable of which was the ‘switchback’ ride from Cuneo(in Piemonte) to Ventimiglia (on the Italian Riviera). The track starts in Italy and rises 500 metres before burrowing its way under the Colle di Tenda, descending 1000 metres into France and thence back to the Ligurian coast in Italy. In between the tunnels and loops which enable it to bridge this height difference, there are some breathtaking views. If you’re a train buff who the likes the sensation of disorientation, this is the trip for you. And all this for a preposterous € 7.10 with a ticket bought on the same day. Now that’s what I call pampering to my tastes.