I want my identity back! 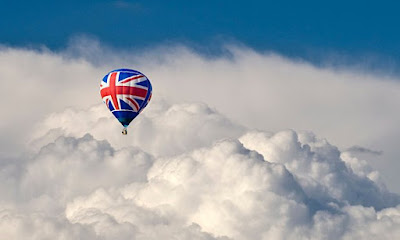 I guess I’m not the only one going through an existential crisis at the moment. I’ve spent the last fortnight pondering on where the last 30 years of my life have gone and where the rest of them are going, rather like staring out of the window of a railway carriage watching the landscape outside unfold. The analogy is not without relevance: last weekend I spent some time travelling on the inter-city between Milan and Venice, across la Pianura Padana, a part of Italy that I got to know well soon after I started working in my first job following my move to the Continent in 1984.

I grew up in post-colonial Britain, a country whose school atlases continued to wistfully colour its former possessions in pink and whose history books hankered back to the bygone days of Empire. With its loss however, came the need to seek out new partnerships. Following the ravages of the Second World War – the worst of which had evaded Britain - our closest European neighbours, in the spirit of reconciliation, were forging new alliances in what we knew as the Common Market, a free trade area from which Britain was initially excluded.
In 1973, after years of negotiations, the UK eventually joined the club officially known as the European Economic Community (EEC). I was at secondary school and the years that followed were exciting times. The subjects I most liked and at which I excelled were French, German and Geography, all three of which I took at A-level, and the latter which I went on to study at university. I was fascinated by language and culture and eager to take advantage of the opportunities which this realignment with our European neighbours was opening up.
During the harsh years of living in England under Margaret Thatcher, it was perhaps an opportune time to move abroad. I could never quite come to terms with the resurgence of jingoism she managed to engender on the back of the Falklands crisis in 1982. And when she wasn’t Argie-bashing, she set out about making short shrift of the “enemy within”, the striking mineworkers. It seemed Thatcher, in rekindling a sense of Empire and inflicting class revenge, was taking us backwards rather than forwards.

I moved to the Netherlands in 1984 and though I’d always harboured a wish to live in mainland Europe, I had to readjust, learn a new language and settle down in Limburg, a region at the crossroads of three linguistic cultures, Dutch, French and German. After a year acclimatising, I was offered a job working on an EC-funded disability project which took me all over Europe to places like Milan, Mulhouse, Heidelberg, Madrid, Leuven, Luxembourg, Dublin and London (yes, London too was in Europe!) This first-hand experience of working on European projects told me that although a lot of time got bogged down in red tape and protocol, these programmes were beneficial – not only for disabled persons, but for cultural exchange and understanding as well. Our main partners had offices in Milan and it was during my many stays there that I spent many happy trips exploring northern Italy by train.
By 1994 I had started out on a new career path. I was already earning money from translating from Dutch into English and decided to go full-time. Writing and languages were in my DNA and having the flexibility of being self-employed enabled me to be a hands-on dad for my son Raph who was growing up in the 90s.
My freelance existence also allowed me to follow another of my passions, photography and I enrolled on a six-year evening course at the art academy in Hasselt, Belgium. It meant notching up many miles – a round-trip of 110 kilometres twice a week - and long hours spent in the darkroom with chemicals, but it was hugely rewarding and brought me into contact with the Flemish, whose most enduring quality has to be that they are so unlike the Dutch. Thumbs up Belgium!
Meanwhile back in the Netherlands ...
As if one six-year course wasn’t enough I embarked on another punishing long-term study, this time a teaching degree which had the ultimate aim of me combining translation work with teaching. Although I got my BEd qualifications, my teaching English at secondary schools here never quite worked out. Eventually I found my feet teaching adults two evenings a week at the Volkshochschule in Aachen in Germany, a 40-minute bus journey across the border.

Now you might think that after clocking up all this European mileage, I was slowly morphing into a foreigner, but nothing could really be further from the truth. I may have left England in 1984, but I never cast myself adrift. I’ve always tried to retain ties with friends and family in all the places I lived and worked during my formative years in Britain – my home city of Manchester first and foremost. As a well-known geographer and outdoorsy type, of all the landscapes I know, the one that sets my pulse racing the most are the heather-clad moorlands of Northern England.
From afar – and often close up - I’ve continued to follow the fortunes of my home-town club as best as I can: watching Manchester United walk away with the treble at Camp Nou in 1999 will be an enduring memory. Another of my childhood passions was cricket, perhaps the sport I missed most of all when I left England behind in the 80s. That all changed however, when with other ex-pats, I helped start a cricket club in Heerlen that still flourishes today.
In fact, embracing both a British and European identity has never presented a hindrance. On the contrary, it has been instrumental in helping me accomplish much on a personal and professional level. I’m incredibly lucky to have a bilingual son who shows a strong allegiance to his father’s country of birth and who is likewise making his way in the world of languages and translation. Thankfully, his horizons too stretch a long way further than the confines of his own national frontiers.
As far as translation is concerned, my years of living on the Continent and my own cultural and linguistic background have given me a distinct insight into the subtle differences between source and target cultures so that I am uniquely placed to take advantage of the profession. Likewise my teaching: I like to think I have dispelled many of the stereotypes and contributed in a positive way to an understanding of British and English-speaking cultures.

In short, I feel as much European as I do British. Up until now, I’ve never questioned the fact that the two might be incompatible. Without a doubt, the driving force behind that sense of duality has been the political alliance forged between the nation states of Europe, the erstwhile Common Market, now the European Union. After the outcome of the EU referendum that balance has been irrevocably upset.

More than anything the moment is symbolic, the culmination of many years in which much of the British public – spoon-fed on a diet of falsehoods by a pernicious press – fell into believing that its hardships and failings had been caused by Europe and not by the failures of successive governments at home. It was all about emphasising the differences, not the commonalities, an us-versus-them politics, let’s blame it on Johnny Foreigner. Pragmatism, common sense, open-mindedness, fair-play and a healthy dose of self-deprecation - the very fundamentals of what people believed Britain to be - have gone out of the window, replaced by delusions of grandeur, irrationality, insularity, intolerance and anger. Britain has never been so divided. It certainly wasn’t the country I grew up in.
The European Union is no paradigm of democracy, but neither is Britain, with its unelected upper chamber and an electoral system that allows one party to govern by itself with just 37 percent of the popular vote. For all the flaws the European Union may have, undisputedly its most noble achievement has been to help keep the peace for more than 60 years on a continent that for centuries was perennially embroiled in conflict. One country’s leaving of the EU does not necessarily put that peace at risk, but the symbolic act of slamming the door shut and turning one’s back on one’s closest neighbours and allies sends out a warning.

But to return to the railway analogy: it’s as if I’ve now arrived at the station to find a through train leaving soon on the main line, whilst another is stuck in a siding waiting for the whistle to blow and signal its departure onto the branch line, destination unknown. Let’s hope I don’t jump on the wrong train.
Posted by Chapter & Verse at 15:04