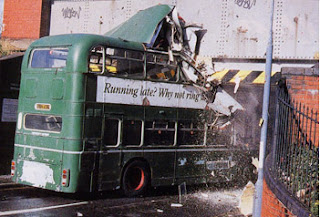 On the ferry home from the UK last week, I picked up a brochure published by a Dutch quango* called De Verkeersonderneming. It provided information on height restrictions for heavy goods vehicles on certain roads in the Netherlands, particularly those with low-clearance bridges and tunnels. Important information you would think for foreign drivers and freight forwarders using the motorway network in the country. The text had been written in Dutch and English, but was specifically targeted at an international audience. Verkeersonderneming.nl is a slick website and the agency has likewise gone to great lengths working on the design, layout and printing of the brochure. So you would have thought that the very least they would do was arrange for a professional English translation, written in clear and concise language. Instead they seem to have found someone within their ranks whose translating skills are inferior even to Google Translate. Just take a look [my comments in square brackets] ...


Stop! You have been detected and are too high! You cannot proceed!

Frequently (international) trucks are too high for the tunnels and viaducts in the Netherlands [a comma after frequently would make all the difference]. According to the European and Dutch rules and regulations, the maximum height for trucks is 4 meters (13,12 ft.) including load [basic error of not using a decimal point here, and the use of inches would have been even better!]. If necessary, it is possible to receive exemption for higher transportation [why not just 'vehicles'?]

When a too high vehicle a vehicle approaches a tunnel [‘too high’ must go in front of the indefinite article], the traffic light [plural better] will immediately give a red sign [signal not sign]. The truck, as well as the traffic behind the truck, are being put to a stop [just clumsy English]. This causes unnecessary congestions [plural not possible] and avoidable disadvantages for the district and the transportation sector [what they are trying to convey here is that damage to the infrastructure will have negative repercussions for the regional economy and the transport industry, but this is just bad English]. Also consider: trucks with “clapping sails” [this is just funny: what they mean is flapping tarpaulin] are potential causers of damage in tunnels.
Damage in tunnels and viaducts caused by trucks that are too high can add up to an amount of more than € 150.000 [use of decimal point instead of comma to separate thousands: this is almost unforgivable]. Satisfaction for the damage is to be sustained from the responsible party [Perhaps by satisfaction they mean schadenfreude??]. Additional fines (up to € 750,00) [not again!] can be applied for trucks that are too high [and they don’t mean ‘Additional fines’, but ‘Additionally, fines ....’].


The text, the full and original version of which can be found here, continues in much the same vein. It’s a real shame when an organisation makes an effort for its end-product to look good, only to be let down in this case by sloppy language. The text is ambiguous at the best of times even for native-English readers, leave alone the many Eastern European drivers who ply the continent these days. What makes it worse here is that it is a information brochure published by a government-sponsored agency who should know better than to produce such an amateurish translation. There's a lesson here for others.
* quango = quasi-autonomous non-governmental organisation
Posted by Chapter & Verse at 21:39