Texting is good for you 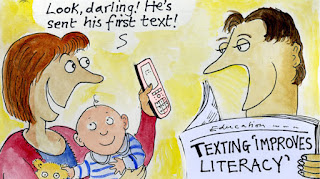 Apart from the obvious hazards of keying in a message whilst crossing a busy street, it’s a generally accepted fact nowadays that texting is good for you.

With text and instant messaging having become increasingly popular over the last decade, an argument has been raging as to whether texting is a help or hindrance to linguistic development and whether it is bastardising the language. The doom-mongers claim that texting will leave us mentally stunted, that it is leading to serious issues arising in the classroom, and that it is wrecking the language. The result will be a general decline in literacy. Others however are far more optimistic, claiming that the popularity of instant messaging on our mobile phones means that more and more people are using the written medium to communicate with each other. Textisms - that is, abbreviations, phonetic spellings, emoticons, etc. - rather than signalling sloppy use of the language, are actually a sign that the author of the message has a good grounding in the use of written language.

The public debate in the UK was sparked off by an article written by journalist and broadcaster, John Humphrys, who hosts the BBC’s flagship morning news programme on Radio 4. In an article he wrote for the (ever-the-conservative) Daily Mail in 2007 he described the ‘onward march of texters’ as a ‘sinister and deeply troubling’ development, with the SMS ‘vandals … destroying’ the language. He expressed a fear that ‘our written language may end up as series of ridiculous emoticons and ever-changing abbreviations’.

Baroness Greenfield, a distinguished scientist researching into brain physiology, has also spoken about the dangers of young people’s preoccupation with instant messaging and the use of social media. In another Daily Mail article, she quoted a study by an Australian professor, which stated that mobile phone use, and in particular, predictive text tools, made children more impulsive and reckless. The speedy exchanges, Greenfield said, ‘may be contributing to the decline in our attention spans and perhaps even towards the rise of attention deficit disorders’.

The vast majority of research in the last few years however, has been favourable towards texting and instant messaging. Various studies have pointed out the fact that abbreviations, or a need to economise on the use of written text, have always been part of the language. In that sense, a conventional text message (which is limited to 160 characters) is no different to other forms of writing where space is constricted, such as a telegram, a classified advertisement, a newspaper headline or shorthand.

David Crystal, very much the guru of the English language, points out that texts which use textisms are linguistically quite complex, with texters (read ‘young people’) putting more effort into texting than is actually necessary. The reason he believes is that people find it fun. He calls this the ‘ludic drive’ and compares it to creative art forms we find in the Japanese haiku or the Welsh englyn.

Clare Wood, a researcher at Coventry University, has also carried out research into the use of texting and reading and spelling development. Most forms of textisms, she contends, ‘are phonetic in nature and require a level of phonological skill to produce and decode them, or a combination of alphabetic knowledge’. Her empirical research showed that children who used a higher proportion of textisms in their messages, relative to the overall length of the message, tended to be better at spelling than children who use more conventional spellings in their messages.

Studies in Canada have also backed up these findings. In a paper written by Connie Varnhagen from the University of Alberta and two associates, the researchers conclude that there are few relationships between new language and [lack of] spelling ability. The researchers prefer to view electronic communication as both a new, complementary language to conventional written language and a natural experiment in the development of written communication.

Hans Bennis is professor of language variation at the University of Amsterdam. In an article in Onze Taal, he points out that people from all strata of society are writing more than ever before. Step onto any bus or train today and you’ll see people busily typing into their mobile phones or tablets. He has invented the term Korterlands to describe an abbreviated form of the Dutch language. And it’s nothing new he argues: Korterlands contains traditional abbreviations (which are rife in Dutch), such d.w.z., i.v.m. and enz. and other forms which have been used widely in e.g. classified ads for decades. It is hardly surprising that people are creative in using language for such applications as text messaging, twitter and social networking because of the number of permitted characters. The use of Korterlands, he concludes, does not form a threat to the language ability of writers. Conversely, it is the result of a creative process which assumes a working knowledge of the written language.

One thing that all these studies have in common is a wish to see these developments being included on the language curriculum in schools. Crystal: There are an extraordinary number of ways in which people play with language – creating riddles, solving crosswords, playing Scrabble, inventing new words, etc. Professional writers do the same, providing catchy copy for advertising slogans, thinking up puns in newspaper headlines, and writing poems, novels and plays. Children quickly learn that one of the most enjoyable things you can do with language is to play with its sounds, words, grammar and spelling. That, of course, includes texting.

On a personal level, as a translator who works with language on a daily basis I enjoy the challenge of a text. If you’re struggling for space in an SMS message, foreign words can often provide a solution, that is, if the recipient knows how to decode the language in the first place, so of course, it doesn’t work for everyone. Here are a few examples: weer (NL=weather), ici (FR=here), e (IT=and), ieri (IT=yesterday), bis (GER=until), ex (LATIN=from).