Cricket in Heerlen ten years on 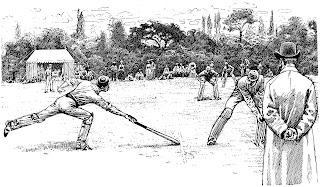 On this day 10 years ago, a Heerlen Cricket XI took to the field in Son and Breughel for the very first time after the club’s re-establishment in 2003. It was a rollercoaster season with ups and downs aplenty. Not many would have wagered on our survival, but ten years later, the club continues to prosper.

Here is an abridged version of my reflections after the completion of that inaugural season.

A long time ago, I was young, lived in England and life was normal - our football team won world cups, our cricket team occasionally won the Ashes and telephone boxes were painted red and were still called kiosks. At school I was told that Holland was a country of culture and sophistication. So I arrived in 1984 with high expectations.

It took me time to acclimatise. I watched, learned and tried to ingratiate myself in Dutch society. But I knew I was different.


I tried to fathom the Dutch fascination for speed-skating. Have you noticed how they crowd their ice-rinks with thousands of flag-waving, clog-stomping, klaxon-blowing spectators who dizzily watch skaters go round in circles all day long? What can a coach say when he gives advice to a skater other than, “Go as fast as you can and stay ahead”? Some sophistication. Some culture.


So I never did fully acclimatise.

Then one day I eventually discovered I was normal after all. All those years I’d tried to enjoy drinking beer from diminutive glasses, I’d just been deluding myself.


My life was changed by a single phone call from a Dutch aficionado, who had the crazy idea of starting a cricket club in the wilderness of South Limburg. So, there really were Dutch people who desired culture and sophistication after all. Somewhere on his road to Damascus, my newly found acquaintance had been transfixed by the sound of leather on willow and wanted to know more.

For the uninitiated, the game of cricket can be best described as having everything (well, at least slightly more than constantly going around in circles on an ice-rink). It is a sport which doesn’t have rules, but laws. It has an etiquette. We take lunch and tea and use the verb ‘declare’ intransitively. Tactics are intellectually challenging, so shrewder teams sometimes employ philosophers as captains. But you don’t have to be a brainbox to play cricket: the game attracts devotees from all walks of life – gardeners, night watchmen, spinners, sweepers, seamers, delivery men, even bouncers. It caters for all shapes and sizes – long legs, short legs and puddings.

Don’t bother to ask ‘who’s winning?’ unless you want to spend the next five days of a cricket match having the laws explained to you. Even then, the match may be tied, but definitely not drawn. Okay, the learning curve can be a long and painful one and may take many years, but is definitely worth the investment. And you’ll end up being cultured and sophisticated.

2003 was a great summer. It started off badly for me. I had spent my first full year of teaching at a school in Kerkrade and it was getting me down. I ended up on the sick. I was becoming Dutch. I was ‘overspannen’.


But cricket slowly changed that.

The Dutch had also taught me how to be cynical, so I reacted with a fair degree of scepticism when ambitious plans were presented to put together a team and play competitive cricket in the Dutch league. A few years earlier we’d had a few friendly knockabouts on the hockey pitch using a tennis ball, but it was like learning to run before we could walk.


Before many of us had even realised, we were registered with the KNCB and we were given a fixture list with a list of places in far-flung corners of the Netherlands that our team of all-sorts was expected to play. It was a daunting proposition. Before I knew it, I was helping to organise transport, phoning opposition captains, looking after the kit, sprucing up my skills which had been mothballed for 19 years and – on top of all that - trying to maintain a home life.

Early on in the season, I’d told a few of the other players that playing cricket in Holland was like having a mistress. I was away from home for long periods. After a lover’s tiff on the Sunday, I was never quite sure whether my mistress loved me or loathed me. Sometimes on Mondays I was depressingly reflective. At other times, I was elated. It was a rollercoaster, but I soon realised I wasn’t the only one on the switchback. It’s just the way cricket is.


Along the way, we collected more players, proving the point that there are enough square pegs that want to fit into a round hole.


So we started and finished the season with a hotchpotch of players, but I rather like that idea. It means that the sum of its parts is greater than its whole and the contributions we make as individuals benefit the entire team.
The season was an obstacle course, but we succeeded in clearing all the hurdles that stood in our way. Nobody (not even the weather) managed to stop us playing cricket. No doubt, there will be more obstacles to come, not least the cold winter months without cricket, but perhaps we need the rest so that we return next year with an extra dollop of enthusiasm.

And the next time I go to England, I can tell my friends that Holland, at long last, is a country of culture and sophistication.
Posted by Chapter & Verse at 10:00