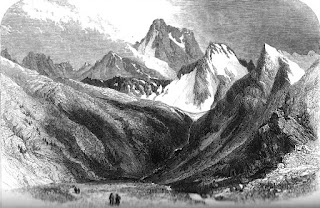 There is no town in Italy which commands so magnificent a panorama of the chain of Alps as Turin. The wide plain on which it stands, with its sea-like surface broken into undulations by ranges of low hills, crested with copses and sparkling villas, rolls many a league around, until it is suddenly interrupted by the mighty rampart which encircles it in a horseshoe curve 250 miles in length. Many noble peaks rise at intervals along the ridge; northwards of the dazzling snows of Monte Rosa and the Lyskamm, and in the S.W., where the great chain approaches nearer than elsewhere, it towers up into the rugged pinnacle of Monte Viso, one of the most precipitous and striking mountains in Europe. The streets in Turin are straight, and cross each other at right angles; stand where are you will, and look in any direction excepting eastward, and some portion of the Alps closes in the vista. In one of the quarters of the city half of the streets open out towards Monte Viso, so that it is almost constantly in view, and stands like a giant sentinel, sleepless, immortal, keeping guard over the kingdom at its feet.

For anyone standing on Monte dei Cappuccini today, a small hill overlooking the River Po in Turin, these words are no less true than they were when they were penned 155 years ago. On a clear day, the pyramidal outline of Monviso (Monte Viso in French) to the south-west of the city is unmistakeable and dominates the skyline in this quadrant.
The passage of text is taken from the opening paragraph of an account of the first recorded ascent of the 3,841-metre peak on 30 August 1861 by two British climbers, William Matthews and Frederick Jacomb, together with their French guides, Jean-Baptiste Croz and Michael Croz. Known attempts had been made on Monviso before, the first serious one of which had been made in 1834 by Domenico Ansaldi, a local surveyor, but because of insurmountable obstacles and dense mist, his group had to give up and turn back at a height of around 3,700 metres. In 1839, the British physicist and glaciologist, James David Forbes, reconnoitred the mountain and was the first to make a circular tour of the massif.
Matthews’ ascent took place during the golden age of mountaineering, a period between around 1854 and 1865 when most of the major peaks of the Alps were summitted for the first time. It was dominated by British alpinists and their Swiss and French guides and culminated rather poignantly in the fateful first ascent of the Matterhorn in 1865. For many alpinists at the time mountaineering was primarily a sport, but more often than not there was a scientific objective to the climbs and, as well as carrying a variety of instruments up the mountain with them, they also made detailed descriptions of their adventures. No surprise then that a full account (including the introductory passage above) appeared in Peaks, Passes and Glaciers, one of the leading journals of the time, which eventually became the Alpine Journal.

But now, astonishingly, new evidence has come to light which casts doubt on the record claimed by Matthews in 1861. The findings of this new research contend that there was a real possibility that Monviso was first ascended 110 years previously in 1751. French and Italian historians working in collaboration stumbled across early maps of the region which suggest that the mountains had been accurately surveyed by means of triangulation in the 18th century. In their research paper, Une autre histoire des Alpes. Les ascensions oubliées des officiers géographes et des habitants des Alpes du Sud (1750-1850), Oliver Joseph and Paul Billon-Grand (historians based in Vallouise, France), Eugenio Garoglio (researcher at the University of Turin) and Alexandre Nicolas (cartographer) argue that in order to achieve the accuracy of measurements to produce such detailed maps, using the principles of triangulation, engineers must have had access to the highest points in the district, including Monviso.

Despite being mountainous and largely inaccessible, in the 18th century the territory in the surroundings of the Cottian Alps, of which Monviso is the highest peak, was heavily contested by France and Savoy, so it was important for military strategists of the day to have detailed knowledge of the terrain. Between 1749 and 1754, Pierre-Joseph Bourcet (1700 – 1780), a French military engineer and cartographer, was commissioned to map the borders in this part of the Alps. By then, triangulation had become the most accurate method of mapping, already having a long history in France. The theory of triangulation, based on the principles of trigonometry, has been described elsewhere in these columns, but measurements in the field would have involved the accurate calculation of distances between the highest points in the vicinity, such as towers and hilltops, with the aid of surveying equipment. As visible poles would have had to be used, this would have meant accessing these points to obtain precise measurements.

The researchers have compared the observations on the old maps with modern cartography and discovered that the heights of mountains and the distances between summits differ by only a few metres, measured over distances of 15 to 20 kilometres. According to the researchers, this level of accuracy – around 1% out - could have only been possible if the highest points, including that of Monviso, had been climbed. Documents archived in the records office of the Hautes-Alpes département reveal that military surveyors officers would have been accompanied in these ascents by local villagers who would carry the equipment as well as act as guides. They would have been employed to place ranging rods (tree trunks) with flags on the summits which would have been visible for miles around. At this stage no one knows for sure whether Monviso was indeed scaled during this period, but maps made at the time include topographic icons pinpointing the exact locations used in the triangulation process (in much as the same way the Ordnance Survey of Great Britain use trig-point symbols on its maps today). 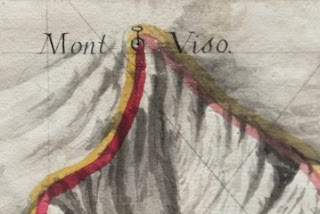 Of course, there are counterhypotheses too, which argue that given the known technology and mountaineering skills available in the 1750s, it would have been nigh impossible to reach the top of Monviso, In fact, the first documentary evidence of an attempt on Monviso by the surveyor Domenico Ansaldi in 1834 - by which time cartographic technology had advanced considerably - shows that his team of staff were beaten back fairly convincingly by the elements.

Whilst the researchers are confident about their initial findings, they concede that more documentary evidence will have to be uncovered before it is known whether the mapmakers beat the mountaineers to the top of one of the Alps’ most iconic peaks. Aficionados of epic tales of exploration and cartography like myself await their findings with interest, but it would not be the first time that mapmakers, rather than alpinists, made mountaineering history.

Peaks, Passes and Glaciers: Being Excursions by Members of the Alpine Club. SecondSeries, Volume 2