The Jungle Railway – a train odyssey through Malaysia 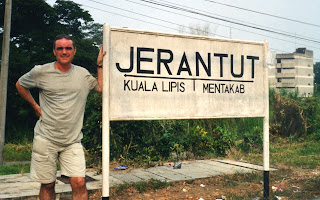 14 years ago, I found myself aboard the slow train that runs down the spine of the Malay Peninsula. If you're looking to get places quickly, then the Golden Blowpipe isn't for you …


Saturday 9 August 2003
The alarm on R’s watch stirred us from our sleep soon after 4 am, but there was no sign of our 4.15 wake-up call. After dressing and finishing our packing, we drifted downstairs to the reception, still in total darkness at this time. I recognised what I thought was the outline of a member of staff, presumably asleep, slumped over the desk. When I called out, I heard a thud, which this time came from underneath the counter, and moments later the receptionist appeared, upright, rubbing his head in a daze. In the meantime, his colleague behind the desk was also now awake, who, it turned out, was the driver of the taxi we’d ordered the night before. Before long we were speeding away from Safar’s Inn and out of Kota Bahru towards the station at Wakaf Bahru where our 350-kilometre train adventure would shortly begin.
When we arrived at the railhead, there was scant sign of life and after consulting one of the notice boards, it became apparent that the times of our train been altered as of 1 August “for the convenience of travellers”. Instead of a 5.45 departure, we would have to wait until 6.52 to climb aboard!
To kill time, we paced up and down the platform waiting for dawn to break and signs of human activity. Above the horizon I noticed Orion in the night sky – not visible in temperate latitudes at this time of year. Then, slowly but surely, things started to stir in and around the station buildings. First to turn up were a couple of talkative schoolgirls in headscarves. A Chinese porter appeared on the scene to load sacks of fruit and vegetables onto trolleys. Some time later, a mother-daughter combination, who had the concession for the station buffet, opened up their kiosk where we were able to enjoy an early morning cup of coffee sweetened with condensed milk. Gradually backpackers started arriving and at 6 o’clock, the station master appeared unhurriedly opening his office for the early morning travellers. Eventually I acquired our tickets for the 10-hour journey to Jerantut for the outrageously cheap price of 12 ringgits 60 sen each, just half the price of the taxi-ride from Kota Bahru!
The train which was to take us south through the interior finally arrived at the (re)scheduled time and we climbed on to the air-conditioned carriage in the centre of the train. Whoever regulates the air-conditioning on public transport in the tropics is usually over-zealous and we soon discovered that it was a few degrees cooler than was ideally comfortable. This had us and our fellow Western travellers rifling through our backpacks for sweaters and long trousers, not something that would be normally required in these climes.
The long haul to Jerantut takes just over ten hours and calls at 68 stations (often little more than halts). That’s a stop every 10 minutes or so. Some stations along the line serve as a passing point when oncoming trains can cross. For the first part of the journey the train follows the valley of the Sungai Kelantan, after which the province is named, before entering the interior proper. The two most important ports of call en route are Gua Musang and Kuala Lipis.
As the train journeyed southwards, the carriage started to fill with passengers, all locals, hauling local produce to sell at markets down the line. Hawkers walked up and down the carriages selling liquid and solid nourishment – boiled eggs, various fruits and rice – to passengers, one of whom was keen to engage us in English conversation. Hamzani was on his way to Gua Musang from Tumpat. Though he was good at asking questions in English his ability to understand answers was wanting, but he was friendly and prepared to let us share his food including salak fruit (cone-shaped with a scaly red husk and a firm and slightly sweet flesh), papaya and quail eggs.
Since the temperatures inside carriage had been set too low, quite absurdly, it was necessary now and again to take a stroll to the vestibule at the end of the carriage for the warmth of the outside air. As we approached the halfway mark of the journey at Gua Musang, the train was brimming with travellers and their wares and soon my efforts to offset the chill in the carriage became thwarted by assorted boxes of durian obstructing the entrances. Chaos ensued whenever a train stopped to allow yet more people on and the gangways between carriages became completely blocked, but strangely no-one became agitated. At one point I managed to graze the back of my leg on the prickly rind of a durian, but it was easy to forget the discomfort and the stench coming from this enigmatic fruit, being offset by the warmth and stunning views out of the open carriage doors.
I was joined for a while at the end of the carriage by a Dutch backpacker from Zeeland, surprised by my fluent Dutch. She told me that she and her friend had been travelling in Malaysia and had journeyed up to the beaches of Pulau Perhentian, off the coast to the east of Kota Bahru. Their plan was now to go trekking in the Taman Negara and thence to the Cameron Highlands before returning to Singapore. She was planning to travel independently to Australia from there.

We arrived at Gua Musang at 12.50. Here the scenery changes dramatically and the undulating jungle countryside gives way to a landscape which is studded with impressive limestone outcrops. The train stopped here for the best part of 15 minutes, so it was a joy to get off and have a walkabout.
Beyond Gua Musang, the railway crosses the state border into Pahang. On my next excursion to the end of the carriage, I got into a stifled conversation with 18-year-old Din. His English was even worse than Hamzani’s but he persevered. He managed to explain that he was on his way home from Gua Musang to Kuala Lipis. We exchanged names by way of writing and I had to show him the date on my Dutch residence permit to show him of how old I was. He was going home because he’d ran out of money. A 5-ringgit note was all he had in his wallet. The conversation eventually ran dry and I went back to my seat when he disappeared into the toilet.
7 hours in and the journey was now becoming tedious. A few stations later we were joined by a party of headscarved student teachers who were on their way to a training camp further down the line.
Kuala Lipis is the next town of any significance on the route. Not that it’s of any great size. When the British held sway in Malaya, it functioned as an administrative capital for the surrounding region and consequently has some interesting colonial buildings.
Several tour agents got on here. Jerantut is a major stopping off point for tourists wanting to trek the Taman Negara and many operators hawk their travel and accommodation services to the backpackers well in time before they arrive at their destination. They seemed to be attracting enough punters, perhaps including our Dutch backpacker.
To break the monotony, I went to the buffet car and had some coffee (again sweetened with condensed milk). I stayed there awhile gazing out of the window watching the luxuriant tropical scenery pass by. South of Kuala Lipis the track follows a route alongside the muddy Jelai river passing through some lush, green, wooded countryside.
Finally, we pulled into Jerantut at around ten past five, where we were met by my brother who had driven over from Kuala Lumpur to pick us up. We took some photographs and waited for the train from Singapore bound for Gua Musang (which was late) to cross, before we started on the two and a half hour journey to KL. It had been a long and eventful day.


Background information
One of South-East Asia’s premier rail journeys is the 15-hour passage through the lush jungle and rainforest-clad east coast of the Malay Peninsula. The Express Timuran (formerly known as the Sumpitan Emas or Golden Blowpipe) cuts a swathe through this verdant landscape and the journey is as interesting as the destinations it connects. The rail line operates under the authority of Keretapi Tanah Melayu Berhad (KTMB) and is a simple but important means of transportation for the people who live in this largely untouched part of the country. The trip on one of KTMB’s trains may not be as lavish as some other routes, particularly the Eastern & Oriental Express (E & O), which runs between Singapore and Bangkok, but the east coast jungle route is a more true-to-life travel experience offering a window onto the heart of the Malaysian social landscape.¹
It took indentured Tamil workers eight years to build the five-hundred kilometre jungle railway from Gemas, south-east of Kuala Lumpur, to Tumpat on the north-east coast. The line has been in full operation since 1931 (the first section from Gemas to Kuala Lipis was opened in 1920) and much of its rolling stock has not been upgraded since. Initially it was used for freight – first for tin and rubber and later for oil palm - before a passenger service was opened in 1938.²
Wakaf Bahru, which marks the northernmost point on the line today, is a fifteen-minute minibus ride from Kota Bahru, the state capital of Kelantan, in the north-eastern corner of mainland Malaysia. At 94%, the Malay are the dominant ethnic group in the state and Islam the chief religion, though like all major cities in the country, there is a sizeable Chinese community and a smattering of Tamils and Siamese. The city is a showcase of classical Malay history and culture has a 300-year-old mosque and an abundance of museums, craft shops and a central market that must be one of the most colourful in Asia.