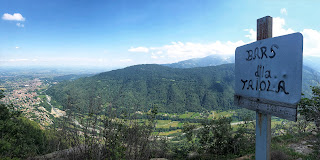 Castelluzzo. Its very name intimates impregnability, and even though there is no evidence to suggest there was ever a permanent stronghold here, this truncated cone of a peak holds a commanding position above the approach to the valley. On its flanks is a distinctive outcrop of rocks, about 200 metres below the summit, whose crags conceal an almost inaccessible cave known as Bars d’la Tajola, or ‘Cavern of the Ropes’. Accessible only from above, in times of hostilities – of which there were many - this lofty bolt hole offered a place of refuge away from the threat of danger in the valley below.

Tucked away in a small corner of Piemonte on the border with France, Val Pellice has never featured on any Grand Tour. Although it is the gateway to some splendid walking trails in the Cottian Alps on the border with France, without the enticement of a ski resort it attracts little inward tourism. It may not be one of the most majestic of Alpine valleys, but what it lacks in physical grandeur, it makes up for in history and legend.

Bars d’la Tajola is just one of many historical features scattered around the hills and valleys that allude to a turbulent past. At the entrance to the valley is Torre Pellice, the valley’s principal settlement and the centre of the ‘Valdesi’ community, whose peoples also inhabit the adjacent valleys of Val Chisone and Val Germanasca. The cultural roots of this mountain community go back as far as the twelfth century when these whereabouts formed a bastion of a Proto-protestant faith that predated the Reformation by several hundred years.

The ‘Valdesi’– or Waldensians in English – first came onto the scene in the 12th century as part of a religious movement which had turned its back on the worldliness of the Catholic doctrine to observe a simpler way of life. Disillusioned with the traditional teachings of the Church, its founder Peter Waldo was a rich merchant from Lyon whose disciples – known as the ‘Poor Men of Lyon’ - originally met with the approval of the local Catholic archbishop. From the east of France, its teachings quickly spread, initially to Lombardy, but later to other regions of Europe. Over time, the Church of Rome became intransigent to these dissidents and ultimately denounced them as heretics. Hence there followed a policy of persecution and they were forced to go underground, or at least retreat to less obtrusive surroundings on the mountain fringes.

Having adopted the teachings of the Poor Men of Lyon, the fact that the Waldensian communities survived in this region of the Cottian Alps is probably due to a combination of their geographical isolation and their level of organisation. When Luther and other religious reformers emerged in the early sixteenth century, the Waldensians made a conscious decision to join the Reformation. In 1532, at the Synod of Chanforan, in the Agrogna Valley a few miles from Torre Pellice, representatives of the Swiss Protestant movements and the Waldensians resolved to adhere to the principles of the Reformation and to publish a translation of the Bible in French, the language used in the valleys at that time. Emboldened by the changes taking place, the Waldensians came out of hiding and started to build their first temples (hitherto their religious teachings had been served by roaming preachers who travelled following fixed itineraries).

But religious harassment was endemic in the Middle Ages and in the Valli Valdesi persecution came with the territory, quite literally. Periods of uneasy truce were followed by sporadic bouts of brutality. This came to a head in 1685 when the Edict of Nantes, which had granted concessions to the Protestant communities of France (and Savoy) was repealed. A full-scale pogrom followed with 2,000 Waldensians being massacred. Many more thousands were faced with the choice of converting to Catholicism or being incarcerated in prison. Some sought refuge in the mountains and fought a rearguard action against the occupying forces, who had colonised the valleys with their own. The guerrilla tactics deployed by these so-called ‘Invicibili’ resulted in some limited successes and in 1686 they were eventually able to negotiate a deal whereby 2,750 Waldensians were given the option of exile in Geneva.

Banished from their homelands they pinned their hopes of a return on chnaging circumstances. These came about even more quickly than they may have anticipated when, in 1689, there was a decisive shift in the international situation. The king, Louis XIV was caught on the backfoot by Dutch and Austrian troops when invading the Rhineland Palatinate and William, Stadhouder of Holland succeeded to the English throne after James II, a Catholic, had been driven out of the country. Western European geopolitics were shifting. The exiled Waldensians were now in receipt of generous support from Protestant lands to the north and the Huguenots of southern France. On 17 August 1689, Henri Arnaud, one of the leading pastors, assembled an army of a thousand men and set off on a tortuous route across the backbone of the western Alps to evade militias loyal to Savoy. Crossing these hostile and barely impenetrable lands and confronting many hazards along the way, they finally reached the village of Bobbio in Val Pellice on August 31, having overcome all obstacles in their path. At Sibaud, just above the settlement, a thanksgiving service was held in recognition of this epic undertaking. A monument stands there today to commemorate this epic event in Waldensian history, the undertaking having since become known as the ‘Glorious Return’.

After a period of hostilities, various treaties were signed which made reoccupation of their lands possible. The events should have marked a turning point in their fortunes, but resettlement of their valleys proved problematic, not least because they had been laid waste and local conflicts dragged on. For 150 years the Waldensians led an insular existence in their valleys, hemmed in on all sides by legal restrictions. Contact with the Protestant communities outside Piemonte was however maintained and generous support was offered from active committees in Britain and Holland. Later, the French Revolution brought renewed hope. Because of this almost total isolation, this period was known as the Waldensian Ghetto. Despite being physically hemmed in however, thanks to the religious and cultural relations maintained with outside states and the importance the community gave to education, the best young Waldensians took up studies at illustrious English, Swiss and German universities.

On 17 February 1848, the Albertine Statute was proclaimed in Turin. This was later to become the basis of the legal system for a unified Italy which was declared in 1861. More importantly for the Waldensians it gave them the right to be free citizens with full civil rights. To this day, Waldensians throughout the valleys of Piemonte celebrate this act of enfranchisement annually with great bonfires throughout the valleys on the evening of February 16.

Until this point, because of their isolation, the Waldensian valleys had been forced to align themselves politically and culturally to communities on the other side of the Alps. Over the centuries, Latin, Occitan, Piedmontese, Italian and French had all coexisted as working languages, but to all intents and purposes the latter had become the Lingua Franca of the valleys, reinforced by the adherence to the Reformation in the 16th century, the translation of the Bible into French and the events surrounding the Glorious Return. Furthermore, the use of French, which was the language of the European courts and diplomacy, enabled the Waldensians to escape their isolation and attract the support they needed from outside. French continued to remain the language of the valleys after the unification of Italy, but with their gradual assimilation into mainstream Italian culture and especially the imposition of Italian under Mussolini, Italian gradually became the more dominant language. Television too, has contributed to the decline of French. Today French is still spoken in the home in some of the valleys and is understood by the majority of the population.

The last 150 years or so since the proclamation of the Albertine Statute have been relatively peaceful compared with the religious turmoil of previous centuries. The unification and democratisation of Italy and the onset of secularisation have largely seen to that. Whilst religion may not play such a big part in present-day Italy, the Waldensians are staunchly proud of their cultural heritage. The elegant pedestrianised Via Beckwith in Torre Pellice’s ‘quartiere valdese’, flanked by the Tempio Valdesi on one side, and the Centro Culturale Valdese on the other, provides evidence of this.

The town’s tourist information centre is only too pleased to direct you to some of the historical places in the valleys around, for example: the Sibaud monument near Bobbio Pellice where the covenant of the same name was signed on the Glorious Return; the Ghiesa d’l Tana, a small cleft in the rocks on the wooded hillside above Agrogna where the faithful were said to have worshipped in times when the Waldensian teachings were prohibited; or the memorial at Chanforan commemorating the agreement signed with leaders of the Swiss Reformation to have the bible translated into French in 1532.

Some landmarks of course, require more legwork, such as the Vallone degli Invicibili, the small valley where the ‘Invincibles’ held out after the 1685 massacre. Indeed – as we have already remarked - the Bars d’la Tajola, on Castelluzzo, requires some nifty ropework too.