One crowded hour of glorious life 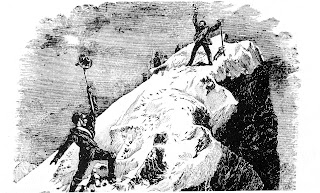 On July 14 every year, I would phone my dad and we would reminisce about events that had unfolded a century and more previously. Since my father’s passing away last summer, for the first time that opportunity has been sadly denied me. It’s a shame, he would have rhapsodised about the remarkable feats which led up to the moment when the Alps’ most iconic peak, the Matterhorn, was scaled for the very first time on this day 150 years ago.

Ever since I was old enough to remember, a colour photograph of the Matterhorn decorated the wall above the mantelpiece in the living room of our home in Chorlton-cum-Hardy, Manchester. I was too young at the time, but my eldest brother recalls my father coming home from work one evening with a brown-paper parcel from Boots’ picture-framing department containing the said item. The picture depicts a snow-covered mountain, its almost perfect pyramidal shape rising imposingly above the lush green meadows below. Occupying the foreground is a line of four timber haylofts, which drop away from the centre right of the picture. In the background, against an otherwise brilliant blue sky, are faint wisps of cloud around the summit.
We do not know what my father had in mind when he bought the picture, but, for some reason or other, the mountain held a spell on him. What sparked his fascination remains a mystery.
Whatever, my father (and later myself) developed a curiosity in the mountain. Our local library held a copy of Edward Whymper’s Scrambles Amongst the Alps, a title that was otherwise long out of print, so in order to satiate our interest in the author’s escapades we had to keep renewing the loan on the book. I was in my early teens and was already familiar with intrepid tales of exploration, such as Scott’s Last Expedition: the personal journals of Captain R.F. Scott and Shackleton’s South. For me, Scrambles Amongst the Alps was another such blockbuster read.

In 1865, the Matterhorn was the last major peak in the Alps which remained unclimbed. A steady flow of amateur climbers had been coming to the continent from Britain over the previous decade. Middle-class Victorians were moneyed and had plenty of free-time on their hands. Those with a sense of adventure headed for the mountains. Over a period of ten years, slowly but surely, the highest peaks in the Alps succumbed to their endeavours. It became known as the Golden Age of Mountaineering. Of all the summits, the Matterhorn, which straddles the Swiss-Italian border, was the one mountain that eluded the climbers of the day. At 4478 metres, the mountain is by no stretch the highest in the Alps – Mont Blanc is 4810 metres - but its isolation and apparent inaccessibility made it a formidable proposition. To add to its claims of invincibility, superstitious locals spoke of spirits that dwelt on the mountain which would hurl down vengeance from its impregnable heights on anyone who had the audacity to approach.
In 1860 Edward Whymper arrived in the Alps for the first time. He was a 20-year old wood engraver from London who had been commissioned to produce a series of alpine scenes by a publishing company. Brash and brazen and with little trepidation, he used his time to pursue a newly found passion for climbing and the young artist soon became an accomplished mountaineer, ticking off many of the major Alpine peaks himself, some as first ascents. More than most however, he was drawn to the Matterhorn and was one of the first to believe that the peak was surmountable.
He made his first sallies on the mountain in 1861 and in the years that followed made no fewer than 8 attempts to reach the summit. Employing local guides with mountain skills and a knowledge of local conditions to assist him, he tackled the Matterhorn from various angles, most frequently from the Italian side. His first-hand accounts of his forays on the mountain in Scrambles Amongst the Alps provide a fascinating insight, not only into the fledgling sport of mountaineering, but also into 19th century life in the Alps.
Despite the miscellany of assaults on the mountain by Whymper and his contemporaries, by 1865 the Matterhorn still remained unconquered. On 10 July of that year, Whymper found himself in the village of Breuil on the southern Italian flanks of the mountain. He had been hoodwinked by local guides, whose services he believed he had commissioned for yet another attempt on the peak, but who instead had been enlisted by a team of Italians. Not to be outdone, Whymper hurried to Zermatt in Switzerland, assembling a motley group of climbers, consisting of assorted English gentlemen and Alpine guides, to tackle the mountain from the northern side, still thought to be the most difficult of the two most viable routes to the summit.
There were now two teams of climbers, simultaneously hell-bent on winning the race to the top of the Matterhorn. The Italians were vying for the glory of their native valley and the fledgling Kingdom of Italy. The English-led group, on the other hand, were headed by a man who was obsessed by the idea of being the first on the summit. The latter group, under the command of Whymper, included 2 Zermatt guides (the Taugwalders Sr and Jr) and Michel Croz, an accomplished French guide, well-known to Whymper from many of his previous expeditions in the High Alps. Also in the group were three English ‘gentlemen’: Lord Francis Douglas, Charles Hudson and Douglas Hadow, the latter a climbing novice who was on his first tour of the Alps that summer.
Whymper’s assault from the Swiss side began auspiciously. Relative to the Italian ridge on which so many attempts had been previously made, the Hörnli (or Swiss) ridge proved surprisingly easy. On the night of 13 July 1865, they camped at 3400 metres and at 6.30 a.m., on a bright summer morning, they started for the summit. They were astounded by the relative ease of the climb. Apart from one difficult section on the Matterhorn’s northern face, they encountered little resistance and by 1.40 p.m., incredulously Whymper and his companions stood triumphantly on the summit. At that point it was still not certain whether the Italians had set foot on the summit ridge, but with no sign of fresh footprints in the snow, it was clear that Whymper and his companions had won the day. The Italians were eventually spotted several hundred feet below. They threw a torrent of stones down the cliffs at which “the Italians turned and fled”. The victors spent an hour on the summit. Whymper’s (partly  paraphrased) account below captures the moment:

We paid homage to the view. The day was superlatively calm and clear and the atmosphere perfectly still, free from all clouds or vapours. Mountains fifty, maybe a hundred miles off looked sharp and near. All their details - ridge and crag, snow and glacier - stood out with faultless definition. There were forests black and gloomy, and meadows bright and lively; bounding waterfalls and tranquil lakes; fertile lands and savage wastes; sunny plains and frigid plateaux. There were the most rugged forms, and the most graceful outlines bold, perpendicular cliffs, and gentle, undulating slopes; rocky mountains and snowy mountains, sombre and solemn, or glittering and white, with walls turrets pinnacles pyramids domes cones and spires! There was every combination that the world can give, and every contrast that the heart could desire. We remained on the summit for one hour - one crowded hour of glorious life*. It passed away too quickly, and we began to prepare for the descent.

In such perfect conditions, the climb back down should have been a formality for experienced climbers, even of the Victorian age. However, the combination of a hastily put-together team and slipshod equipment represented the weak link in the chain. They roped up and went down the mountain. As they faced the most difficult part of the descent, Hadow, the most inexperienced of the group, who was in the leading section, lost his footing and slipped. He dragged Croz, Hudson and Douglas with him and together the four of them hurtled earthwards. The rope should have broken their fall, but somehow, the section of rope between the top three and the lower four snapped. “For a few seconds, we saw our unfortunate companions sliding downwards on their back and spreading out their hands endeavouring to save themselves. They passed from our sight on to the Matterhorn glacier below.”
The Matterhorn, freshly vanquished, had claimed its first victims.
The survivors, Whymper and the two Taugwalders, returned to Zermatt in a semi-traumatised state. Afterwards there was an inquest. The survivors of the tragedy were initially accused of having cut the rope, but they were later cleared of any culpability in the accident. The fatal section of rope it seems had been substandard. Nevertheless, alpinism was widely condemned as a sport in the English papers and what was for sure, mountaineering had lost its innocence. The accident was a defining moment of 19th century exploration and mountaineering and effectively marked the end of its Golden Age.
Whymper survived to tell the tale and continued a career in wood engraving and mountaineering, but never at the same intensity. He wrote the book Scrambles Amongst the Alps, not just his own account of the first ascent of the Matterhorn, but also all his previous attempts on the mountain. In it he relates the events leading up to its culmination, not least with a description of the main protagonists. Scrambles Amongst the Alps is more than just an account of the unfolding drama on 14 July 1865, but is a tale of companionship, heroism, rivalry, humour, compassion and, ultimately, tragedy. Sometimes fact can be more powerful than fiction and for me, that’s what makes it such a wonderful read.

My father secretly fancied himself standing on the summit of the Matterhorn. As he got older he realised that it would be an impossible dream. At the age of 71, he first set his eyes on the mountain on a crisp clear autumn day in 1987 and he walked up to almost the exact spot where the photograph he bought at Boots’ picture-framing department was taken. I’m sure it was one of the most magical moments of his life.

Yes, I’m sad that I won’t be able to ring my father this year, but I’ll be forever grateful to him for that photograph on the wall.

* quote from The Call by Thomas Osbert Mordaunt
Posted by Chapter & Verse at 00:14