Werner Mantz in the Mijnstreek 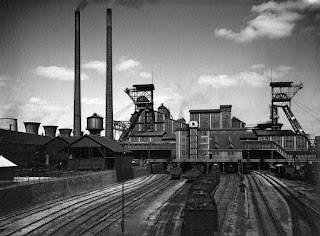 It was two decades ago that I first came into contact with the work of Werner Mantz. At the time I was studying photography at the Kunstakademie in Hasselt, Belgium and had asked an acquaintance of mine to model for some portraits I had been assigned to do. My subject happened to be a daughter of Dutch architect Frits Peutz, one of the leading lights of the modernist movement in the early 20th century, such as Bauhaus. When I presented my model with the photographs from our studio session, she was so enchanted by the results that as a token of her gratitude she gave me a photo book with a retrospective of Werner Mantz’s works1. The photographs included several studies of her father’s most famous creations, which Peutz had commissioned Mantz to photograph, not least the Glaspaleis in Heerlen. The Glaspaleis was put on the list of the 1000 most important buildings of the 20th century by the International Union of Architects in 1999. It was a kind gesture on her part and I treasure the book (and its photographs) in much the same way as a footballer might prize a cup-winner’s medal.

Recently, I was asked to translate a number of texts into English for a catalogue dedicated to Mantz’s work in the coalmining region of Limburg (de Mijnstreek). I was delighted and of course jumped at the chance. The catalogue was being published to coincide with an exhibition in Heerlen, organised as part of the year-long Jaar van de Mijnen event (‘year of the mines’) to commemorate the 50th anniversary of the coalmines being closed down and to throw some light on the region’s industrial heritage. Like Peutz, Mantz was a man of his time, his work likewise reflecting a passion for modernist architecture which is clearly visible in the works on display.
Below is the translation of an extract from an introductory text to the catalogue written by exhibition curator, Flos Wildschut. It provides us with an interesting insight into Mantz and his work in the Mijnstreek …

In the 1930s, the German photographer Werner Mantz (b. Cologne 1901 d. Maastricht 1983) was commissioned to produce an extensive series of photographs documenting the Limburg coalmines. At the time, Mantz had two photographic studios, one in Cologne and the other in Maastricht, which he ran together with his colleague Karl Mergenbuam. Mantz had been visiting Maastricht on a regular basis since 1926 and his interest for contemporary architecture in the Netherlands led him to decide in 1932 to set up a photographic studio in the city. For Mantz, who had a Jewish background, the political situation in Germany at the time also played a role in this decision. He kept both studios until 1938. After the Kristallnacht in the November of that year, he closed down his studio in Cologne to settle permanently in Maastricht.

Internationally, Werner Mantz is considered to be an important photographer in the field of portraiture and architectural photography. In Cologne he produced photographic portraits of key figures from politics, science and art. He also made a name for himself as a photographer of Nieuwe Bouwen, a movement for modernist architecture, which he documented in line with the ideas of the Nieuwe Zakelijkheid ('New Objectivity'). His subject matter he portrayed in all its beauty and simplicity, with meticulous attention to structure and form. Famous German architects, such as Wilhelm Riphahn, Clemens Klotz and Erich Mendelsohn, asked Mantz to photograph their work. Likewise in the Netherlands, he attracted the attention of architects. He was commissioned to do work, amongst others, for Frits Peutz, Toon Swinkels, Jos Wielders and Alfons Boosten. In 1936, Mantz photographed the Schunck department store, also known as the ‘Glaspaleis’ (glass palace), for Peutz. In the two photographs taken of the roof terrace at Schunck, the Limburg mines are clearly visible in the background. Here, modern architecture becomes one through the combination of industry and technology.

Both photographs might be considered as forerunners to the two key commissions that Mantz was given in 1938 to record major works of industry and technology in Limburg. The provincial ministry of transport commissioned him to document the regional network of roads. In two of the photographs from the 'roads' series included in this publication, the mines can be seen in the background. The Dutch state mines also commissioned him to photograph various mines in the region. At the end of the 1930s, Mantz began to concentrate more and more on portraiture photography in his Maastricht studio. From that time onwards, his standout work would be portraits of young children, often dressed for their first communion, using natural light. As a result, for a long time his work of the 1920s and 1930s faded into obscurity.

A change in this came about in 1975. It was in that year that the Cologne-based art group, Kölnischer Kunstverein, organised an art exhibition entitled ‘Vom Dadamax bis zum Grüngürtel’. This helped put Mantz's photographs into the context of international photography for the first time and led to a rediscovery of his work. By that time, Mantz was an old man. He had closed his studio in 1972 and retired to live in Eijsden.
A year after the exhibition in Cologne, Rudolf Kicken organised the first solo exhibition of Mantz's work in his Lichttropfen gallery in Aachen. A major breakthrough ensued in 1977 when a series of ten of his photographs entitled 'Mijnen in Limburg' were included in a specially compiled exhibition to celebrate 150 years of photography at Documenta 6 in Kassel, organised by Klaus Honnef, head of exhibitions at the Rheinisches Landesmuseum Bonn. In the catalogue, the photos were placed alongside the work of Germaine Krull. During this period, the aforementioned museum in Bonn and the Bonnefantenmuseum in Maastricht both acquired photographs by Mantz for their collections. Nowadays, Mantz's work appears in many collections owned by museums at home and abroad.

Since the renewed focus on Werner Mantz in the 1970s, his work has been regularly seen and discussed in exhibitions and publications. These also included photos of the mines. Nevertheless, until now Mantz's series of photographs of the Limburg mines has never been seen or published in its entirety. The ‘Werner Mantz in de Mijnstreek’ exhibition and publication brings an end to this. On the basis of archival research and an inventory of various (inter)national photograph collections, an attempt has been made to reconstruct Werner Mantz's commission from the Dutch state mines using existing vintage prints. To this end, no new prints have been taken from negatives or photographic plates, which are kept in the Nederlands Foto Museum. However, a number of contact prints have been included in the exhibition and catalogue. These prints and negatives have been researched to identify the coalmines which are pictured and to gain a better understanding of the way in which Mantz worked.

The quest to find the photographs which Werner Mantz produced of the mines in Limburg resulted in 79 assorted prints of vintage quality. In fact, Mantz's body of work on the coalmines appears to be much wider than the remit he had been originally given by the state mines.
They testify to the special way in which Mantz went about his work. The style of Nieuwe Zakelijkheid ('New Objectivity'), which he had adopted during his time in Cologne, was used here too: the emphasis is on form and structure, experimentation with light and shade, with particular attention to aesthetics. But his work appears to contain more dynamism too. In the series of the various mines, we see a photographer at work who tries to capture the soul of architecture in cinematographic style. Together with Mantz we - as viewers - can reconnoitre the pitheads or climb one of the tall smokestacks in order to study the construction of another from a different perspective, in both space and time. First, we get a bird's-eye view of the mines and then zoom in on the details.

Mantz’s photos of the Limburg mines represent an important documentary record of their time. Through his eyes, we can observe the reality of the 1930s: a glorious industrial era which we look back on now from a completely different perspective. Back then, no one was aware of carbon emissions, climate change and lung disease. Nevertheless, it's not just about the historical dimension. Mantz's photographs demonstrate a truly documentary approach, in which the subject matter is meticulously researched, with the power of the images playing as much a role as their documentary significance.

Extract from a translation from the original Dutch of the introductory text to the 'Werner Mantz in de Mijnstreek' exhibition catalogue, written by Flos Wildschut, exhibition curator.
The exhibition in SCHUNCK* Collectors House, Heerlen runs from 20 September to 25 October 2015, where the accompanying catalogue (ISBN: 978-90-74106-41-2) can also be purchased.

For more information on Werner Mantz (in Dutch): https://wernermantz.wordpress.com